Below is an article on shooting Gwen, as published in British Cinematographer:

DP Adam Etherington contacted British Cinematographer Magazine, with details about Gwen, released in cinemas on 19th July. In the stark beauty of 19th century Snowdonia a young girl, Gwen, tries desperately to hold her home together. Struggling with her mother’s mysterious illness, her father’s absence and a ruthless mining company encroaching on their land, a growing darkness begins to take grip of her home, and the suspicious local community turns on Gwen and her family. The film stars BAFTA nominee’s Maxine Peake and Eleanor Worthington-Cox, and represents Etherington’s first feature project with long-time collaborator William McGregor.

“Production took place during November and December 2018 in Snowdonia,” writes Etherington. “The film had been in development with the BFI for a number of years and we specifically shot during the winter months to ensure that both the weather and local fauna and flora were right for the story. 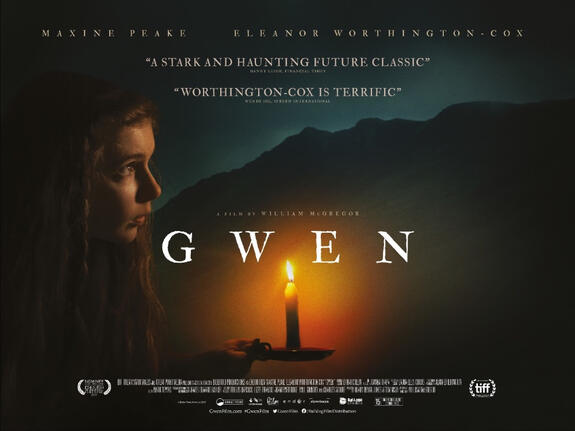 The film was photographed using the ARRI Alexa Mini, working with a combination of SII/III TLS rehoused Cooke Speed Panchros for the daylight scenes, and Zeiss MK3 Superspeeds, which were used primarily for the extensive night work.

Simon Surtees at ARRI Rental was hugely supportive of the project, and allowed us to test various lens and camera combinations in prep. We particularly wanted to explore how different combinations reflected in the rendition of skin-tones when using candlelight and soft daylight.

We took the tests into a cinema grading suite with colourist Adam Inglis (the DI facilities were kindly provided by Dirty Looks) looking for a beautiful and textural image that was grounded in authenticity.

From the testing we decided on the Alexa Mini because of its beautiful authentic rendering of skin tones and amazing low-light performance. We rated the camera at 800ISO throughout the shoot.

With lenses, we found that the delicate rendering and gentle focus roll-off of the Panchros gave us the textural but beautiful and truthful aesthetic that we were searching for. This was echoed and complimented by the slightly more contrasty, but subtly cooler performance and projection of the faster Superspeeds for our night and candlelit work.

Though the softer aesthetic of the Panchros was a key part of our strategy for the daylight scenes, we felt that below T2.8 we couldn’t get the clarity of image projection we required right across the frame, so generally aimed for this as a base-stop for our daylight work.

Using the Superspeeds allowed us to maintain the desired ideology of interactive light for the candle-lit scenes in the story, and the added contrast enhanced the sinister undertones of the thematic use of darkness within the story. We shot the lenses at around T2, something that 1st AC Cameron Howatson did an astonishing job with.

We wanted the camera to move through the world as the characters did. Doug Walshe’s phenomenal Steadicam operating in driving wind and rain allowed us to journey with Gwen as she ventured into the night. Our exterior scenes were lit primarily with a practical lantern and a ¼ Wendy at distance, as well as a few scattered T12s to light the atmosphere and create depth in the environment.

Our primary location was a small stable on top of a hill which had fallen into ruin, and which our designer Laura-Ellis Cricks’ team converted back into a wholly authentic period farmhouse.

We timed our shooting hours and schedule each day to provide the best light possible. George Avery, our 1st AD, was masterful and very patient in making this work to our very specific requests.

We then tried to maintain a focus and our approach on natural sources. We used as much natural daylight as possible as our base, which (lighting gaffer) Sam Alberg and I then supplemented with diffused direct HMI for our interior work. Due to the inaccessibility of the main location, as well as budget, we were limited to smaller 6k fixtures as our base, which our incredible electricians kept running in the most turgid conditions. We then shaped this light from the floor using negative fill and bounce, using old linen to echo the materials that would have been present during the era.

Our interior night work was lit primarily with candles and firelight, as we wanted to echo the low ambient incandescent sources that the characters would have had access to in the period. We sometimes supplemented the candles in the story with additional candlelight through frames, though our testing had allowed us confidence to play scenes in only the available diegetic candlelight on occasion, at times using only a single source.

The time of year and location meant a superhuman effort from the entire crew to keep the production running and on track. The fact that Gwen exists at all as a film is credit to the perseverance and resolute determination of an amazing group of relentlessly committed professionals whom braved atrocious sub-zero conditions, storms, flooding, and a knee deep quagmire of mud on a daily basis to bring the film home. For that we’ll be forever grateful to those individuals and their indelible team spirit."